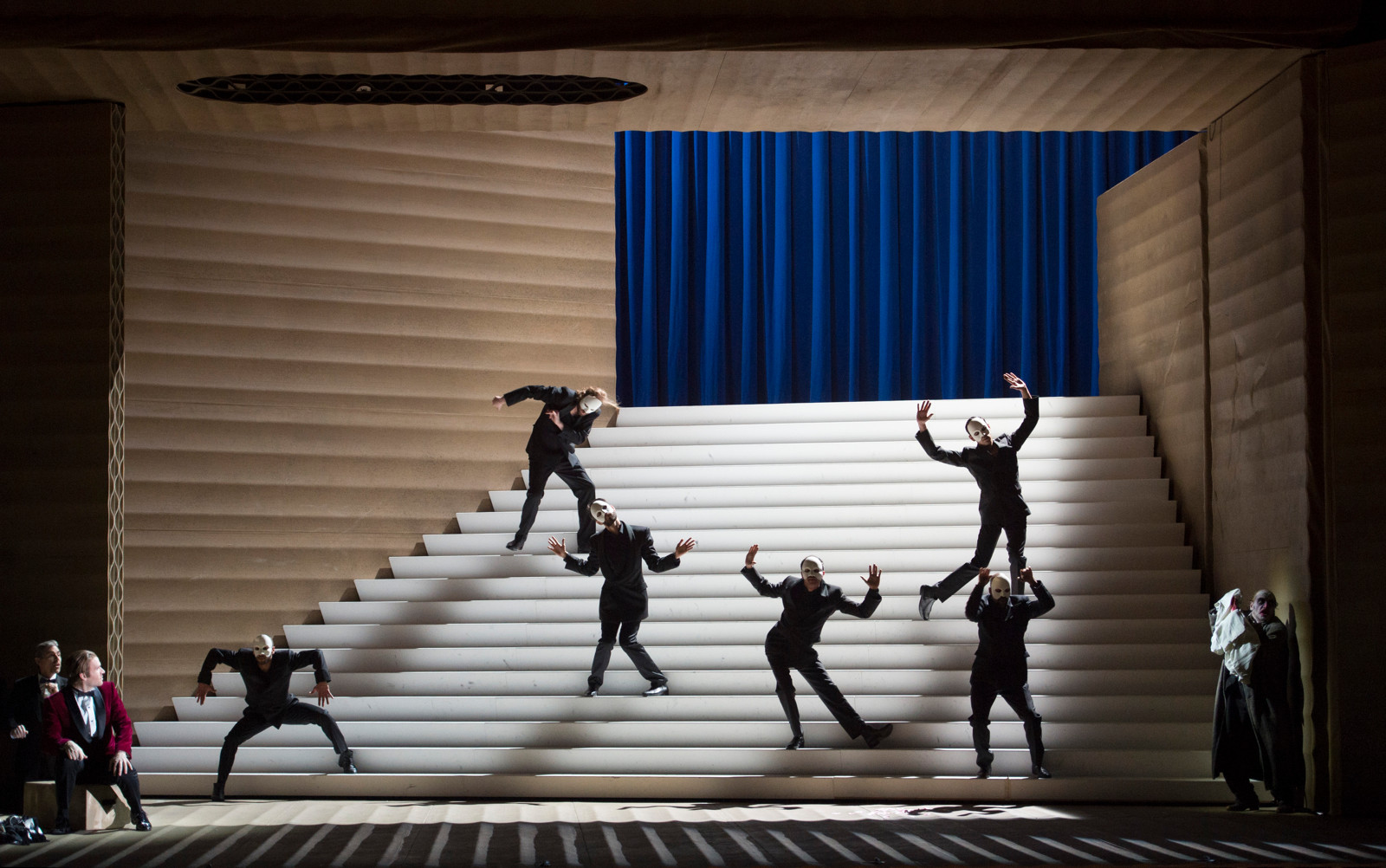 Rigoletto is back on stage at Opéra National de Paris from May 27 till June 27.

Claus Guth’s production of Rigoletto premiered in April 2016 at the Opéra Bastille in Paris. This week, on the occasion of the 2017 revival, we have spoken to set designer Christian Schmidt and asked him for an insight into the design.

In their reading of Verdi’s Rigoletto, Guth and Schmidt were particularly interested in the fate of the title character. “The tragedy affecting Rigoletto with the death of his daughter is the timeless and always touching core of the opera,” Christian Schmidt told Scenography Today.

“His story stands in stark contrast to the world of his aristocratic employer, the Duke of Mantua. We very soon excluded, however, the idea of an overly realistic depiction of that world. To start with, we can no longer trace the historical context meant in Victor Hugo’s drama “Le roi s’amuse”, upon which the opera is based” [a setting which, in Verdi’s opera, had to be changed into Renaissance Italy due to Austrian censorship]. “It has always been rather discretionary which kind of society was specifically meant with this courtly-degenerate world. For the drama, the social and moral opposition between Rigoletto and the Duke is decisive.”

For Schmidt, Rigoletto’s tendency to be overprotective with his daughter is another central point: preventing her from developing self-responsibility and an awareness of the world’s dangers, Rigoletto thus becomes co-responsible, already at an early stage, for her death.

“For us, the main question concerned what becomes of a man who experiences this personal drama,” Schmidt explains. “How can Rigoletto continue to live, now alone and responsible for the death of his dearest one?”

As a consequence, Rigoletto is envisioned as a completely destroyed man, who only possesses the clothes he wears “as a homeless clochard”. His props, or rather relics of his life, can all be found in an old carton: the bloody dress in which Gilda was murdered or the mask and the Pierrot costume as remnants of his professional life as a court jester.

“With these ideas in mind, we concluded that a spatial visualization should exclusively address Rigoletto’s inner world,” says Schmidt.

The set: a carton

Visually rendering the inner world of an old man devastated by his drama can be somewhat challenging in practice. For Schmidt, the creative incipit was quite fortuitous, as is often the case.

“In my Munich atelier, there was an empty, black model of the Parisian Opéra Bastille,” states Schmidt to Scenography Today. “By chance, I had to hand an oddly proportioned, elongated cardboard box, originally containing garden shears. I conducted a spontaneous test and saw that this box filled the 1:50 model in an ideal way.”

This solution was able to deliver two sought-after effects: an anti-illusionist spatial solution – inspired by Shakespeare’s theater – a box that could easily accommodate completely different environments through merely using costumes and a few features.

On the other hand, there is the representation of an inner spiritual space, an old cardboard box standing for the pitiable existence of the old Rigoletto, in which the cruel game of memories recurs, persecuting him throughout his life.

In this spatial setting, Guth and Schmidt envision a Rigoletto as an actor. On the first bars, at the beginning of the overture, Rigoletto opens a normally sized box on the proscenium. In this moment, his looking into the box becomes the collective view of the spectators: a huge back wall behind Rigoletto turns out to be a cardboard lid. With a spectacular, technical mechanism, this rear wall – as if moved by invisible forces – folds upwards. The flaps inside the box move outwards and form a funnel-like cardboard proscenium.

In synchrony with the suddenly present party music, the spectator’s view falls inside the cardboard box: there is a Renaissance court crowd, “a strangely gloomy, male-dominated world. Soon one realizes that the historical costumes are only historical quotes in a contemporary costume ball,” Schmidt observes.

After this first, disturbing scene, Rigoletto, on his way home, encounters the professional killer Sparafucile.

“In our interpretation, the encounter uncovers a hidden component in Rigoletto’s psyche. His dark side begins a dialog with him: an alter ego of Rigoletto emerges from a royal blue curtain which suddenly appears: wearing Rigoletto’s identical costume, this mirroring dark figure tells him that he can get revenge for money.”

From this moment onward, the blue, mysterious curtain is a continuum. Strongly contrasting with the grim aura of the cardboard space, it carries a meaning that goes increasingly beyond the theater world. “It is more and more a membrane through which Rigoletto’s disturbing memories, surreal visions, and excesses come to the surface,” says Schmidt.

In the second act, the setting is again inside the palace where the courtiers have secretly carried away Gilda. A white staircase filling the stage protrudes into the torn reality of the Rigoletto carton. For Schmidt, it was important to have an architectural element to make this sphere recognizable. The staircase is “steep and of slick perfection, it is a stage for, and a symbol of, the close coexistence of rise and fall.”

The tavern: Cabaret of Death

In the third act, Schmidt creates a theater on stage out of the carton’s architecture. “In maximum contrast to the situation of the desecrated Gilda, this theater houses a revue company of mega-erotic crazy-horse dancers – an unconcealed Paris reference,” Schmidt notes.

“These women, reminiscent of strange birds of paradise, show the abyss of the Duke’s world: drugs, purchasable love – the cold glamour of a perfected sexuality.”

“It is not without a reason that an early film by David Lynch is called ‘Blue Velvet’,” explains Schmidt. “Also in this work, this material is the fascinating fabric of sensuality and perversion at the same time.”

At the end of Guth’s Rigoletto, the blue velvet is also the medium through which the murderer stabs Gilda, who is dressed in male attire. Technically set up by a sudden downward fall, the fabric lies piled up on the ground – instead of the actual sack. Rigoletto holds it desperately in his hands: his daughter has already departed from the physical world and exists only as an approaching memory.

Realization of the project

“Immediately after the presentation of the model in Paris, it was clear to all the technicians and the workshops that the appeal of the settings would lie in a breathtakingly realistic high-magnification of a banal, everyday carton,” says Schmidt.

“As a viewer, attention is drawn, as if through a magnifying glass, to all specific details, such as surface structures, folds on the panels’ connections, or cuts showing the interior structure of the carton panels. These damages, kinks, and the patina of wear show how long this carton has already been serving as storage for Rigoletto’s last possessions. The first models showed that precisely this detail of craftsmanship creates its own, very surreal, kind of aesthetic beauty. Especially in combination with the other elements such as the blue curtain and the white staircase.” Julie Mehretu, Only the sound remains 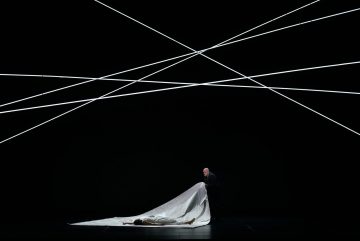