Giacomo Puccini‘s Madama Butterfly is performed for the first time on the Bregenz lake stage, directed by Andreas Homoki with sets designed by Michael Levine and costumes by Antony McDonald.

This new Bregenz Festival production premiered on July 20 and will be on until August 21.

The beauty of Japan is very much inherent in Madama Butterfly. Michael Levine’s inspiring idea for the stage was that of a beautiful, older Japanese scroll painting thrown on the lake. “You take this piece of paper, a representation of the beauty of Japan,” says Levine, “and then you discard it on the lake, which is somehow intrinsic in what is taking place in Madama Butterfly.”

Levine first created the stage in a 1:50 scale model and then refined the surface to give it a paper effect. The model was then digitized and rechecked with the creative team with virtual reality glasses to check functionality, movements, and exits.

The whole shape’s geometry was then segmented into 117 different modules to be manufactured with wood and polystyrene. Like pieces of a puzzle, these were mounted by a crane on a steel substructure fitting perfectly together. “What you see is phenomenal,” says director Andreas Homoki. “I don’t think I’ve experienced that before, and it’s just terrific. You can only compare that to aircraft construction.”

For costume designer Antony McDonald, Levine’s stage was designed in such a way that “it throws everything to the auditorium.” This is a “gift for costume”, as singers, performers, and their movements have an incredibly important role and become the “linchpin of what is happening.”

On the Bregenz stage, “we cannot just do reconstructions of ordinary Japanese costumes,” McDonald says, “because the detail in them would be totally lost here.” Therefore, the most important aspect for the designer was rather the costume’s silhouette. Moreover, he wanted each individual group of characters—e.g. the geisha and the relatives—to have something so distinct in their look to make perfectly clear who they are. “That’s one of the great challenges and thrills of Bregenz,” says McDonald. “you really need to know who is what and where they are.”

At the Bregenz Festival, the stage is designed every two years. It is built at water level on wooden pilots around a core structure made of concrete anchored to Lake Constance’s bottom. The entrusted set designer can request that wooden pilots be drawn and struck again if their project needs.

There is a requirement for the sets’ width to be up to two-thirds larger than in a regular theatre so that the picture is not confused by the surroundings, like the city of Bregenz or passing ships. In addition, the stage should be constructed so that all of the opera’s transformations can take place quickly and silently.

Weather resistance of the materials is also fundamental because the stage not only has to withstand thunderstorms and summer downpours during the two-year season but is also exposed to up to 50 cm of snow and temperatures down to 20 degrees below zero in winter. Ordinary theatrical materials, therefore, cannot be used.

Another top priority is the environmentally compatible disposal of the materials after the end of the second season. While hydraulic parts and motors are reused, the rest must be disposed of in an environmentally friendly way. For this reason, various types of plastic are not employed, and wooden parts are not impregnated (and are kept moist with lakewater for fire protection). On the other hand, wood that has not been impregnated can be reused for building houses or firewood. 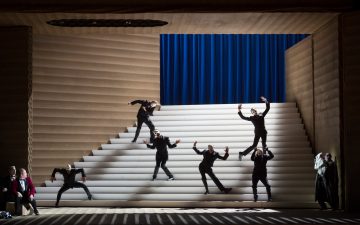 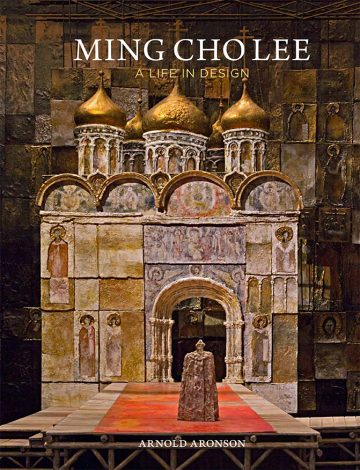