A Chair and You. Robert Wilson's scenography for the exhibition at MUDAC Lausanne.

The Lausanne Museum of Contemporary Design and Applied Arts MUDAC is hosting one of the world’s largest private collections of chairs by artists, designers, and architects. The collection was initiated in the 1990s, and its owner Thierry Barbier-Mueller is now showing it to the public in the exhibition A Chair and You.

The presentation of the 211 chairs and 168 designers was entrusted to director and artist Robert Wilson, who imagined a scenography that borrows from his repertoire in the performing arts.

Innovative research and formal designs, the use and assembly of experimental materials, and the interplay of scale and function characterize the collection.

Wilson appropriates and develops the semantic ability of the object to convey stories without words to unveil and pay honor to each of the items on display.
The show is immersive and spectacular, resembling a four-act opera. Confronting visitors with famous objects, light and sound heighten the dramaturgy of the narrative.

The chair, at the intersection of art and sculpture, reflects the relationship between aesthetics and use, a kind of musicality with a limitless range of possibilities. Thierry Barbier Mueller’s acquisitions evolved organically as he met and found new designers until the chairs grew into a full-fledged collection of approximately 650 pieces from the 1960s to the present day. The collection, which comprises around two-thirds of unique pieces, prototypes, or works from limited editions, demonstrates this interest in unusual items that fall outside the conventional industrial design niches.

Barbier-Mueller is not interested in compiling an entire scientific corpus on the present history of the chair; instead, he is interested in anything that emerges as unique and innovative in the field. This collection includes the work of internationally renowned designers as well as emerging, little-known designers from all around the world. The exhibition A Chair and You provides a glimpse into this collection of authentic artifacts representing a history of contemporary design.

Robert Wilson is a collector himself. When he was very young, he started collecting flint stones, moved by what he defines as a sort of compulsion. He also collects and creates chairs. “I was about eleven years old when I received my first chair,” he says. “It was a trigger to collect chairs. […] I wasn’t so interested in sitting on a chair, but I liked looking at them, and a chair for me was like a sculpture.” In 1968, Wilson started to create his first chair, now featured in Thierry Barbier Mueller’s collection.

Wilson was entrusted with the scenography to emphasize the materials’ sculptural character in the collection. The outstanding scenography, co-created with associate designer Annick Lavallée-Benny, immerses the audience in virtual realms where the chairs are treated as the protagonists of a performing arts show. Sound, light, and sets create a one-of-a-kind experience for discovering the iconic design object: the chair and its numerous forms.

Robert Wilson and his collaborators met in Watermill, New York, to build the groundwork for A Chair and You, which project was based on designs for MUDAC’s new halls. The museum’s stage was divided into four sections to accommodate the objects’ curated selection.

“When we first met the team, the first thing we talked about was light,” says Robert Wilson. “It reminded me of what Louis Kahn used to say when I was at architecture school: students must start with light. […] Light isn’t something you do after you’ve designed an exhibition; it’s an integral part of the project. Hence, we started with the lighting. In the theatre, people often laughed at me when the first thing I did was light a production. Light is structural; light is architectural; it’s the element that helps us hear and see.”

Wilson’s special relationship with light dates back to the 1970s. “I was very impressed by my meeting with Luchino Visconti in 1974,” Wilson says. “I watched him work for two hours as he painted with light. I knew from then on that one can paint with light onstage, and that’s what I’ve been doing since. I wanted to be a painter when I was younger, but I wasn’t very good. What I could do on stage, I couldn’t do on canvas.”

Like an opera in four acts, the exhibition is divided into four spaces

Bright Space – Islands made up of a dense network of the collection’s most colorful and varied chairs give visitors the feeling of being lost in a dense forest. In a light-filled space, bright colors, unexpected materials, and curves dominate. The chairs were instinctively organized by family and theme, such as animality, duality, sculptural aspect, pop, humor, or engineering.

Medium Space – The Medium Space is defined by calm, minimalism, and geometry. This monochrome landscape is divided by straight, clear lines. The room’s layout, a sequence of tulles dividing the translucent set, is inspired by Mies van der Rohe’s German pavilion. The airy, calming area interacts with seats that have prominent architectural elements. The mild, diffuse light contrasts with the metallic sound environment.

Dark Space – Visitors are stunned as they enter a dark, peaceful space through a lowered, backlit door. The chairs are unveiled in turn, as if floating in the darkness, by changing lights that give the seats a star-like radiance. The projectors direct our sight, as though in a planetarium, to the most significant chairs in the collection.

Kaleidoscope Space – The final space remains closed—a cube lined with mirrors serves as a showcase for the objects. The sculptural and metallic features of the seats, which blend into this reflected environment, are shown through circular apertures in the façade. The kaleidoscopic effect is enhanced by the changing light.

Robert Wilson works with all elements at the same time. From the very beginning, he thinks about light and the soundscape. “What do I hear? What’s the sound like in the first room, how is it in the second, how is it in the third?” he questions. “What’s the last thing that I hear? On Broadway, you always have to ‘start strong and end big.’ In theatre, the last thing you hear or see is the most important. Sometimes, if you do something at the very end that seems right, the audience might forgive you for what you’ve been doing all evening!”

As for the selection of the object in A Chair and You, Wilson is particularly interested in how the chairs are placed. “Each group helps me see the other, simply because of the way they are organised. This is what is exciting about designing an exhibition. […] I often work with counterpoint, which allows you to look at one thing against another.”

The exhibition A Chair and You is on until Sunday, 26 February 2023, at the Museum of Contemporary Design and Applied Arts, MUDAC of Lausanne, Switzerland. 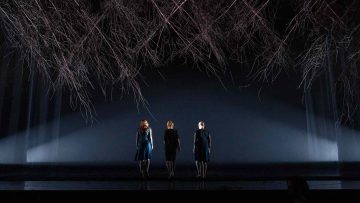 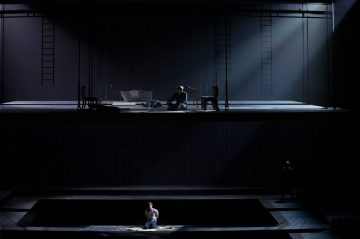