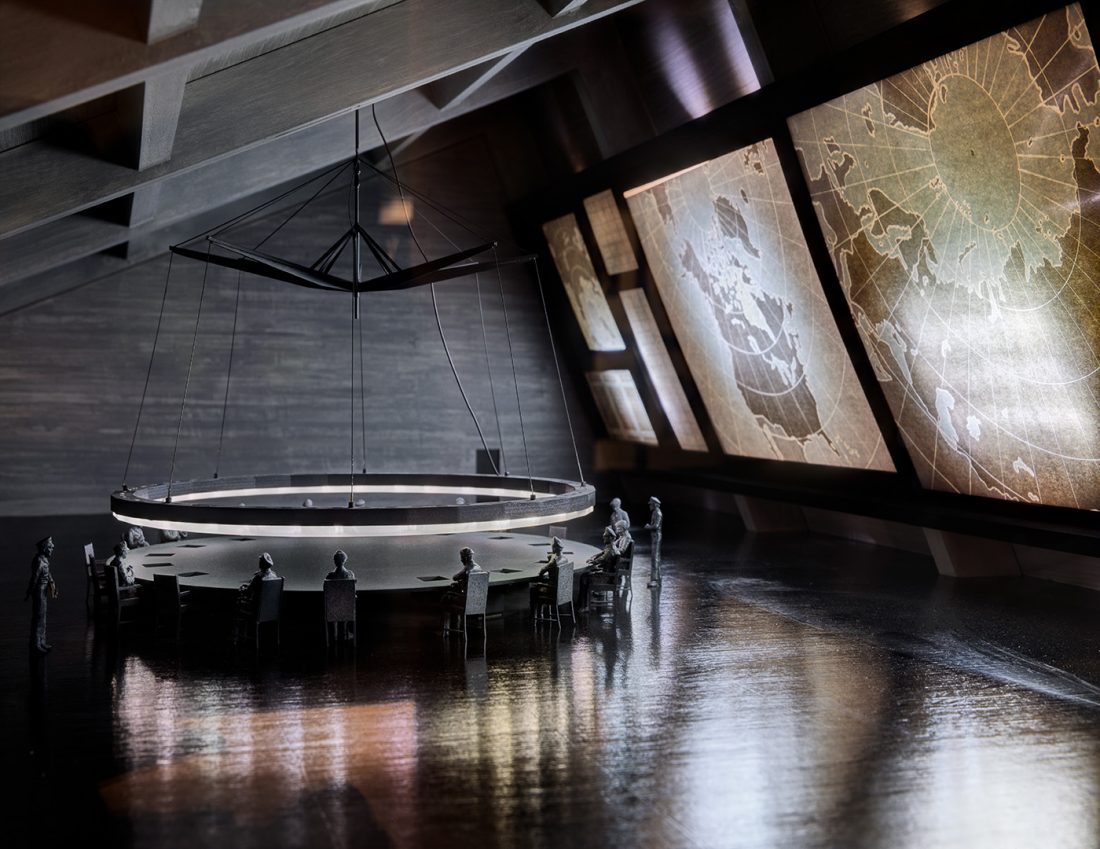 © Ed Reeve for the Design Museum

© Ed Reeve for the Design Museum

Marking the 20th anniversary of Stanley Kubrick’s death, the Design Museum of London celebrates the work of one of the greatest filmmakers of the 20th century. The exhibition explores his unique command of the whole creative design process of film making, from storyteller to director to editor. At the exhibition, the public can relive iconic scenes and discover unseen material from his film sets, including The Shining, Barry Lyndon, 2001: A Space Odyssey, Full Metal Jacket, and A Clockwork Orange.

This internationally touring exhibition about the life and work of Stanley Kubrick was originally produced in Germany by the Deutsches Filminstitut & Filmmuseum and is now in Britain, co-curated by Adriënne Groen and Deyan Sudjic.

Britain was Kubrick’s home and workplace for over 40 years. It was in the UK that Kubrick created the battlefields of Vietnam for Full Metal Jacket (1987), an orbiting space station for 2001: A Space Odyssey (1968) and Dr. Strangelove’s War Room (1964). The exhibition tells the story of Stanley Kubrick showing step by step how he created genre-defining worlds for his films and how London was his endlessly inventive canvas.

Visitors enter the exhibition whilst walking on a replica carpet from the iconic scene in The Shining, before entering a ‘one-point perspective’ corridor mirroring Kubrick’s famous camera technique

Dr. Strangelove’s War Room is probably one of the most iconic film sets ever designed. The exhibition features a model of the set originally designed by Ken Adam who also worked on Dr. No, among others.

Moving on to 2001: A Space Odyssey, the visitor discovers how Kubrick developed the incredible Centrifuge set which represented a mechanical way of producing artificial gravity for long-duration space missions. It’s amongst the largest kinetic film sets ever built. Through original photographs, detailed drawings, and a replica model, one gets a strong sense of the manufacturing involved with creating the set.

The exhibition features about 700 objects, films, and interviews, bringing to the fore Kubrick’s innovative spirit and fascination with all aspects of design, depicting the in-depth level of detail that he put into each of his films.

From predicting the modern tablet and defining the aesthetic of space exploration a year before the Moon Landing, in 2001: A Space Odyssey (1968), to the use of NASA-manufactured lenses to film by candlelight in Barry Lyndon (1975), Kubrick was just as much an inventor as a filmmaker.

Kubrick is closely associated with Academy Award-winning costume designer Milena Canonero who designed the costumes for  A Clockwork Orange, The Shining, and Barry Lyndon and which originals are on display. Visitors can catch a glimpse of the dresses worn by The Shining twins and the “Apollo” jumper worn by Danny. Also on display are original sketches and research on costumes and locations from Canonero, including never-before-seen costume test-photographs of the hats from A Clockwork Orange.

The exhibition will be on at the Design Museum of London until September 15, 2019.