Leonard Bernstein‘s Mass is a musical theatre work based on the Tridentine Mass of the Catholic Church.

The piece—a commission of Jacqueline Kennedy—premiered in 1971. Its libretto includes liturgical passages in Latin and Hebrew and additional text in English written in part by Bernstein himself.

This new staging was produced by Teatro dell’Opera di Roma, Italy, and entrusted to director Damiano Michieletto. The production opened the opera house’s summer season at the venue of Caracalla, the renowned Roman baths archaeological site in central Rome.

Scenography Today has spoken to designer Paolo Fantin to learn more about the sets and collected impressions from costume designer Carla Teti.

“Damiano [Michieletto] has been telling me about his dream of staging Mass for at least seven or eight years,” says Paolo Fantin. “Staging it in this very moment in history, in which we are all disoriented, was for us a meaningful opportunity. Uncertainty needs answers and the arts and theatre can provide them through new forms.”

The staging of Mass may recall in the audience the critical events of our times, as “there surely is the war, the pandemic, the many insecurities we all live in,” Fantin says. “The show is about us, after all, but rather than portraying a chronicle of current events, we used highly metaphorical and symbolic language to bring facts to the stage.”

Like a triptych, the show unfolds over three main scenes, Fantin explains. It begins in a festive setting characterized by pastel color costumes. A joyful community of people gathers around a large table while children carry wheat bundles, “a symbol of fertility, future, and hope,” says Fantin. “Dancers compose images that remind of Christ’s last supper in a festive mood on impactful music.”

Fight against the matter

As to interrupt the festive moment, a ‘construction site’ bursts into the image to give way to the second scene named by the team ‘the fight against the matter’. Three cranes shift large concrete blocks above the banquet site.

“My aim was to create a metaphor for the continuous flow of construction and destruction cycles typical of humankind. I highlighted the contrast between the sense of destruction in the Roman ruins and that of construction of cranes at work. I imagined this as an intense scenic action and a symbol of our times.”

“Erecting walls is often the easiest answer to uncertainty,” Fantin says. “And this is a social problem we wanted to highlight. Still today, walls are built to separate countries. Emotional walls are erected among people to avoid communication. On walls, homophobic and racist hatred is expressed in writing.”

As the cranes lower the concrete blocks, the street singers wearing golden sequin costumes assemble the construction site. “They symbolize the cynicism of those who, in search of power, want to destroy communities and erect barriers,” says Fantin.
Once erected, the concrete wall is the central piece on which the passages of Christ’s passion take place, including the Celebrant’s lapidation with mortar and his crucifixion on a black cross painted on site.

After the crucifixion, “we finally have a catharsis,” says Fantin. “When you hit rock bottom and think there’s no hope, well, there actually is.”

The community slowly begins to break the wall which is made of a special cracking material. From behind it, the characters open breaches making their way through the matter. Physically exhausted and wearing destroyed costumes, they compose a shipwreck-like image.

Once the wall has been broken, a black plastic membrane from the stage floor mounts as a wave wiping out everything. Cranes slowly lift a series of black, shiny, slightly squeaking plastic membranes to form a threatening black sea of subconical pinnacles.

“We derived our shipwreck image from Géricault‘s The Raft of the Medusa, obviously in our own interpretation,” says Fantin. “From this black sea, the community emerges slowly, and, as in the painting, one can see a light far behind.”

This light and new wheat bundles brought from the parterre to the stage are symbols of rebirth.

“This is to say,” Fantin concludes, “that despite our disorientation in this flow of construction and destruction, we can hope to see a light to start again. And let a new cycle begin.”

No aestheticization, only ‘change’. Notes on the costumes – with Carla Teti

“They are divided into two groups in stark contrast: those of a happy community gathering to celebrate, dressed in simple clothes in harmonious and joyful colors, as opposed to a destructive and violent group of people dressed in blinding gold sequins mixed with flesh-colored elements. A deformed and vulgar mass, a magma of people with no values, wearing transparent plastic masks on which I painted augmented make-up and equal wigs to enhance their violence and cancel their individuality.”

“I had to create a sense of closeness in the audience, almost a physical participation in the dramaturgy,” Teti goes on. “Therefore the costumes on stage create contrasts, change, live, tear, and get dirty with color, mortar, and clay … It wasn’t easy, considering the complicated work behind the scenes in constant evolution, both for make-up and tailoring and laundry. No aestheticization, only ‘change’ was my watchword. Both the costumes and souls end up torn, dirty, exhausted, yet illuminated by the light of hope of those who try to survive the darkest moments of a common destiny.” 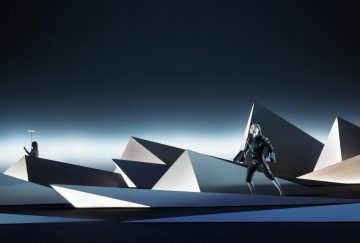 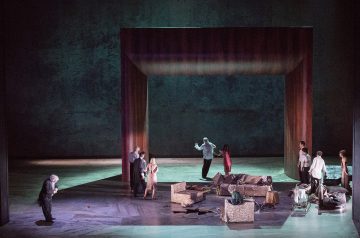 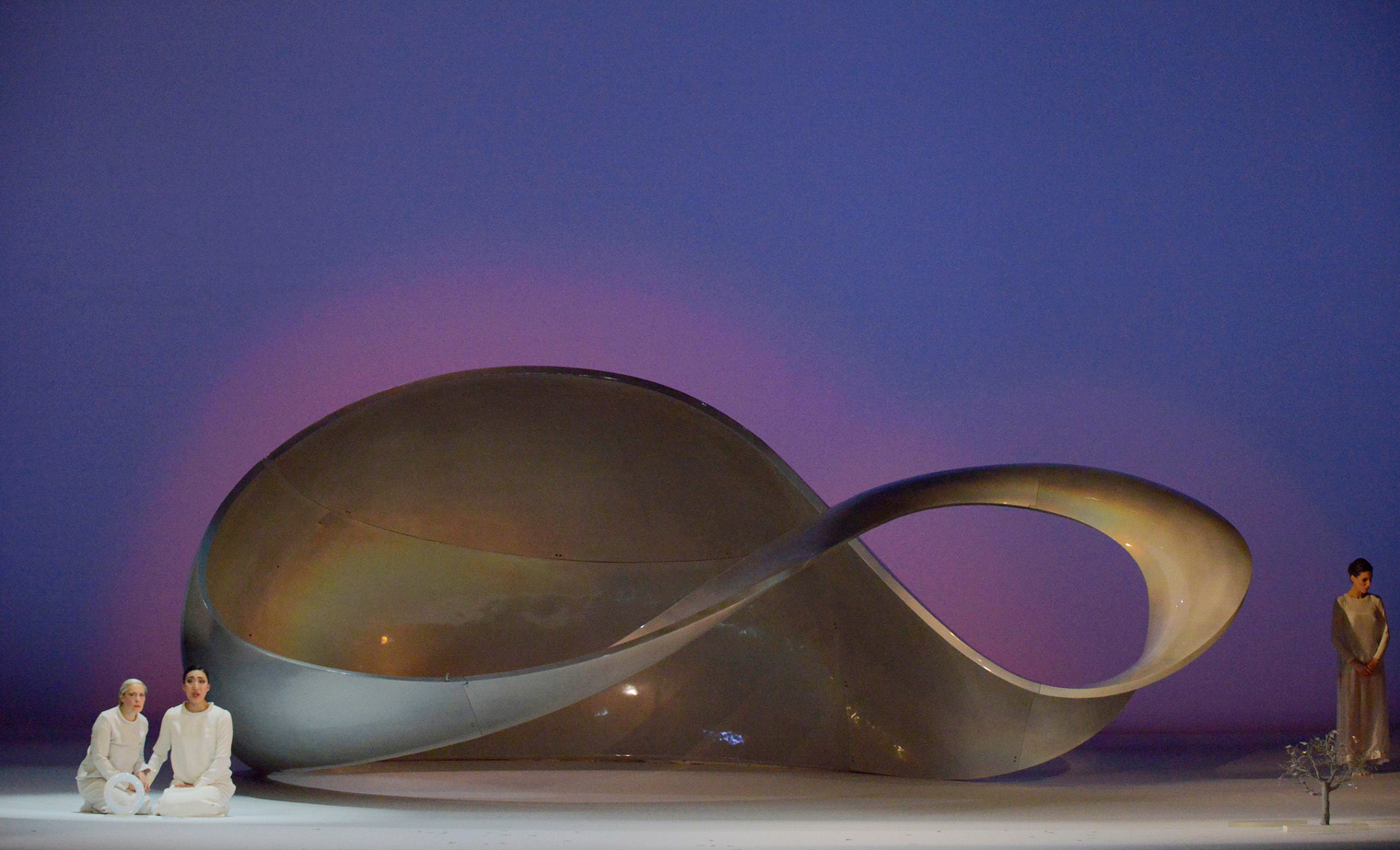