Tartuffe has premiered in June 2017 at Residenztheater, Munich, Germany. It will be back on stage this October.

Regarded as a masterpiece of comic drama from the mid-seventeenth century, Tartuffe is a play in which Molière addresses societal issues of his days, particularly concerning religious controversy. Although the play has a very specific historical setting, its significance and appeal are considered universal.

The play’s principal setting is a wealthy family home in Paris in which craziness and irrationality are the norm. In the house, a closet is pivotal element for the play’s plot, serving as hiding place for the characters while they are overhearing conversations.

For this staging directed by Mateja Koležnik, set designer Raimund Orfeo Voigt turns the traditional rooms into a transit space, exploiting the implications of the spatial arrangement. “In my work, I am interested in the consequences of space,” Voigt told Scenography Today. “How it shapes the form of the situations for the actors or singers and influences their way of acting on the other side.”

Voigt approached Tartuffe wanting to adhere to the entrance-exit dramaturgical system provided by the text, however not by building a room equipped with doors. He looked instead for a space where exiting and entering would be a common activity: a staircase. “The staircase configuration,” he said, “actually follows the structure and system of Molière’s play, where you find numerous entrances and exits in the scenes. On this staircase, you don’t stay, you only pass from A to B. Or if you stay, that is for no other reason than to be alone.”

Because there are no doors, every spoken word can be overheard along the stairs in front or behind the wall, “which is exactly the situation we were looking for, for the actors,” Voigt said.

In his work, Voigt is also interested in creating a specific focus for the spectators. In Tartuffe, he frames the image in a passe-partout as to put the action under a magnifying glass.

The spectator only sees the excerpt of a more extended space. Dialogues are performed shortly in the visible front part and then continued in the hidden back. “By doing this, we only hear the spoken word and combine it with a different figure passing,” Voigt said. “This reduction in visual information enhances the auditory part and adds layers in the viewer’s imagination. It makes the spectator follow more intensively the actor, the movements, and the motion: a slight turn, a gaze, or a still moment suddenly stand out like under a magnifying glass.”

Eventually, time and space become one entity in this induced focus: “What we don’t see becomes more important than what we see. We end up in a quite graphical set up, where there is no logic of entrance and exit, nor up and down,” he said. “This realistic space becomes more an Escher image just by the way it is treated.”

Since most dialogues are carried out with the awareness of being heard, Voigt also concealed some microphones in different parts of the set to slightly enhance the sound, in order to bring the auditory level as forward as the visual.

Following this method of enhancement through reduction, Voigt also chose the single material of the set. The same, large, wooden panels are used for stairs, ceiling, and walls. Voigt has used real wood in order to lend the architectural setting the flair appropriate to the character’s social status. 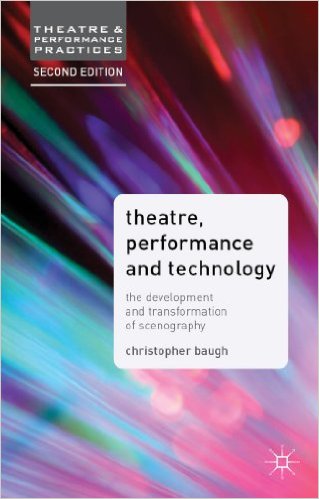 Theatre, Performance and Technology: The Development and Transformation of Scenography 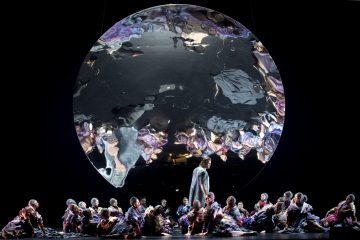