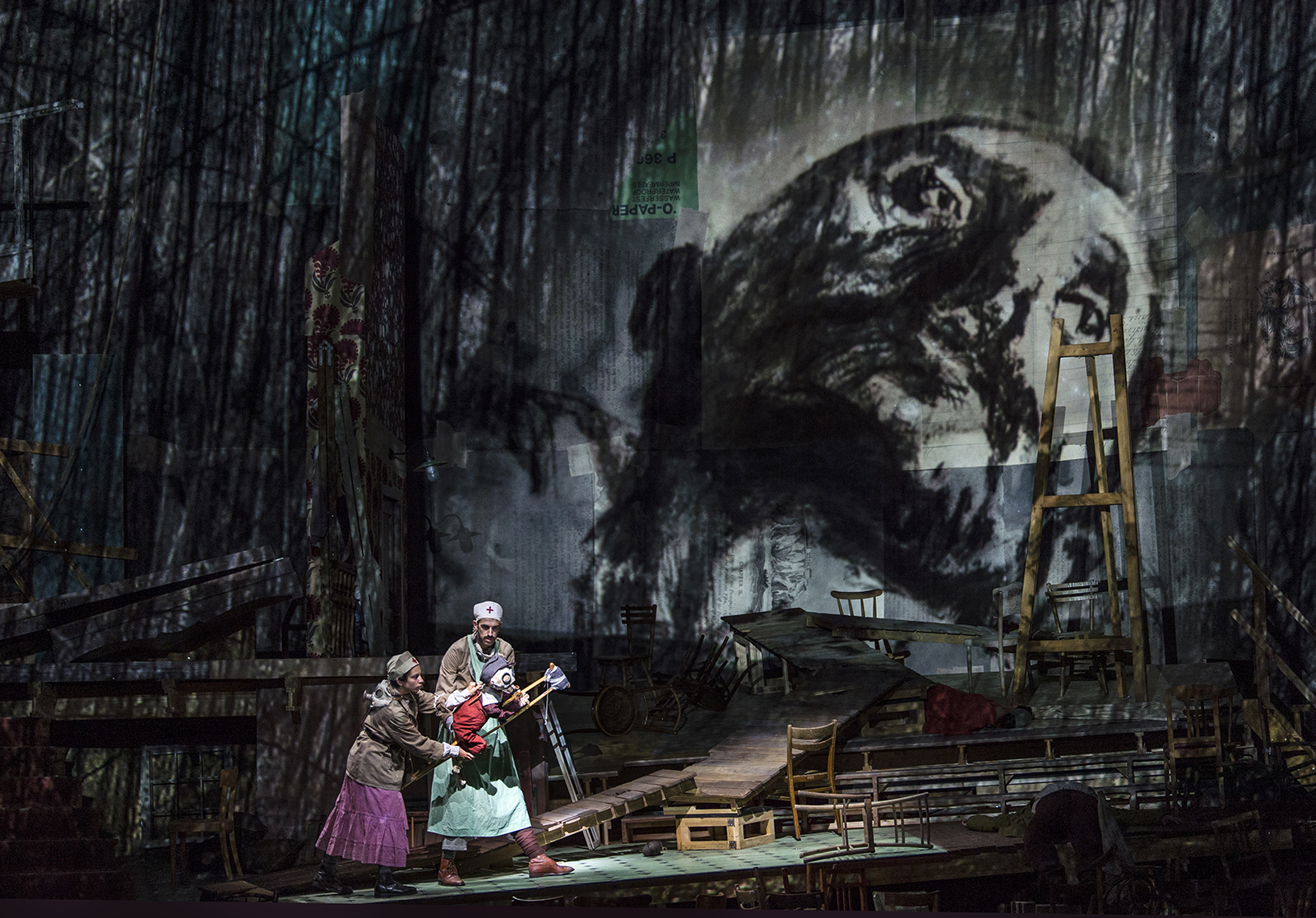 Scenography Today has spoken to the set designer, Sabine Theunissen, who gave us insight into the concept and structure of her set.

The opera and the play

Wozzeck is an opera by Alban Berg composed between 1914 and 1922 based on Georg Büchner‘s play Woyzeck (1837). It is divided into three acts articulated in several (fifteen), relatively short, scenes.

Büchner, who died in 1837 at the age of 24, left the play unfinished in form of fragments. These were later reworked and first published in 1879 by novelist Karl Emil Franzos who, misreading Büchner’s handwriting, named the play Wozzeck. The play was first staged at the Residenztheater of Munich in 1913.

Wozzeck is a soldier living at the lowest end of the social hierarchy who earns extra money shaving his captain and submitting to his doctor’s medical experiments. He lives with his mistress Marie, mother of his child, who has an affair with a drum major. In a world of poverty, social exploitation, humiliation and jealousy, Wozzeck turns crazier and crazier, he has apocalyptic hallucinations, hears voices and feels persecuted. In the end, he murders his mistress.

William Kentridge had his first encounter with Büchner’s play Woyzeck twenty-five years ago when he staged the theatre play. He then staged Shostakovich’s The nose, followed by Alban Berg’s Lulu to finally get to Wozzeck in what he defined a “circling around of what is, with no doubt, one of the great, great operas of the last century.”

Kentridge sees different ways in which Wozzeck is emblematic of the 20th century. Among these, the fact that the whole opera is constructed with fragments of scenes assembled in form of a collage, “which one normally associates with modernism from the period of the first world war” but in fact is found eighty years earlier in Büchner and in Berg’s opera.

Structurally, it is a very different way of making an opera – says Kentridge – compared to the long scenes of traditional opera. This bears a similarity with another satirical masterpiece of the first world war which is Karl Kraus‘ The Last days of Mankind in which collage, satire, and the image of the extraordinary violence done to people by the culture of the military is shown clearly.

In the opera, and in Wozzeck himself, there are many visions of a world in fire, fire coming down from the heaven, of the earth being hollow, the landscape being filled with decapitated heads. What Büchner writes in the 1830s will become reality eighty years later as seen in the photographs of the First World War: the huge explosions, the people lost in the battlefields – says the director.

Images and visions that Kentridge translates into a series of drawings made in charcoal, which are projected on the set. “Sometimes the projections are simply the landscape or the village in which a scene happens and sometimes the images are transformed into the visions of Wozzeck, the intimations of disaster that surround him,” he explains.

For his drawings, Kentridge looked at the pictures of the first world war in Flandres as e.g. the battle of the Yser, the towns of Diksmuide and Ypres – set designer Sabine Theunissen tells Scenography Today. “The rich, grainy texture of the charcoal drawing evocates elements as dust, heavy smoke, mist, earth, explosions, all depicting the war context.

The set is a fine-tuned result of details, colours, rhythm, and contrasts; a polished magic and fine balancing of lights – here designed by Urs Schönebaum -, video, costumes, shapes, and movements.

The set is made of two main elements: a cyclorama – the “landscape” -, and a middle “island”. The two assuming different narrative and evocative functions.

It is the projection of an interiority made of visions, obsessions, fears, nightmares, and reminiscences, as well as the narrative representation of the scenes locations, all conveyed by Kentridge’s charcoals projected on the cyclorama, a backdrop made in patchwork technique out of paper sheets and book pages, merging and interacting with the video.

It is Wozzeck’s mind. An unstable stacking of platforms, duckboards, walls and objects. “A very unstable adrift raft, lost in the sea after a shipwreck,” says Theunissen.

“The island in the middle of the stage, the large background around it and the zigzag duckboards have been the basis of our vocabulary.”

“The zigzag rhythm recalls that of trenches in the Flanders during WWI, the duckboards literally represent the dangerous and mysterious underworld of the trenches or recall the image of an ineluctable history in the collective memory. They have been there since day one of our work process.”

“It is interesting to note,” she adds, “that during the preparation of the opera, we found out that most of the shellshocked persons who came back from war were actually the reserve soldiers. They never actually went in the tranches. They were standing by to go there. The fear of the tranches was as devastating as the real danger of being there under the shelling.”

On this island, Wozzeck is trapped in his world and in his paranoia. The character’s mental situation is caused by his subalternity, humiliation, and misery “but we cannot ignore the war context that led to his fear. The fear of what is around him and how to deal with it; the limit between an “inside” and the “periphery”, and its permeability reaching mental illness, was one of the keys we used to construct the space.”

A fear that in Alban Berg’s music is found in a sensorial way: one can smell the scent of the soil, feel the humidity of damped, dangerous earth under the feet – says Theunissen.

The objects forming the island are all archetypes – Theunissen explains – a mixture of standard theatre elements as podests, boxes, wooden ladders etc; domestic elements such as chairs, a cupboard, a staircase, lamps, doors etc. and model elements, such as the main platforms and walls, that have been built on purpose “migrating” from paper to the stage.

A lot of these objects are real objects found both backstage or in knackers in the city. They carry their own history, texture, colour, and damages that are impossible to copy or fake willingly. In part, the construction was an in situ accumulation of these elements. A process that lent the set a colour of authenticity.

All the props are present on stage a the same time: “there are no scene changes, no stage curtain, no machinery. Like in the most basic form of theatre, all is visible on stage from the very beginning but each scene lights and uses different spots,” Theunissen explains.

A wooden ladder and a little screen create the captain headquarters, a divider depicts Marie’s house, a big tricked cupboard is the doctor’s cabinet, the duckboards running over the different levelled platforms are the street or a path in the woods.

Four actors, on stage during the whole performance, handle the props – all real objects. They move chairs, open doors, push the captain ladder, fold and unfold the screen, strike the cupboard in a very low-tech theatrical way.

No curtain is used between acts, “just silence and frozen time. Musical and visual silence, to use conductor Vladimir Jurowski‘s words.”

Besides Karl Kraus with his The Last days of Mankind, cited by Kentridge, another reference was Tadeusz Kantor – says Theunissen.

In Kraus, the comedy is a revealer of horror. It reveals the absurdity of war and violence. Horror turns into absurdity through a squeaky humour. Our production depicts the drama with a distance, leaving a space for the spectator to build his own picture.

Kantor “has a fascinating way of using characters as objects, and objects as characters, no matter what age, gender, scale or look. We follow and believe in the drama based on the strength and rhythm of the acting and its genuineness. He has a great sense of humour, even more if the play is dramatic. Especially his use of objects in the role of strong characters has been of reference.

The non-singing character of the child, for example, became a puppet: a non-emotional object used for the most moving character in the play. Miserable and abandoned, an almost unbearable symbol of despair.

“I would say,” concludes Theunissen, “that the set of  Wozzeck, and maybe the whole production, is closer to the theatre world than to opera. The stage has a small scale, it resembles a dollhouse. We play with the basic vocabulary of theatre where a cupboard becomes a miniature set in the big set, or three chairs become a horse in a playful and abyssal logic where all the details – especially the realistic ones – are vital to create a reference to believe in the abstract.”