Berlioz composed the comic opera Béatrice et Bénédict between 1860 and 1862 and wrote the libretto himself as an adaptation of Shakespeare’s comedy Much ado about nothing. As per his admission, he only took one aspect of the original—namely the sentimental intrigue between Beatrice and Benedick—while inventing the rest.

“We could say that Berlioz took away the obscure part of the text and mainly left the theme of love,” Paolo Fantin tells Scenography Today. “Not much of Shakespeare’s story is left in the libretto, so we opted for a conceptual and visionary reading of the opera. We staged what we could define a love experiment.”

Carried out by Somarone, a character introduced by Berlioz, the experiment revolves around the couple Béatrice and Bénédict who, despite their own stance against marriage, will commit to one another in the end. The staging highlights the dichotomy of free vs marital love embodied in the protagonist couple vs that of Héro and Claudio. It does so through a journey in which the leading characters discover their own relationship. “We have tried to analyze these two opposite kinds of love. On the one hand, Béatrice and Bénédict love each other out of passion with no conventional rules, on the other hand, Héro and Claudio’s love revolves around the security of marriage and a home.”

The scene is articulated in depth along two planes: a dark space on the proscenium and a white environment on the stage. “For the sets, I took inspiration from a control room,” says Fantin. “On the dark proscenium, Somarone conducts the experiment and he audiotapes everything happens on stage, while the white room is the space of the experiment”.

All chorists are Somarone’s helpers who with headphones and microphones spy and audiotape all dialogues. The recordings will be used in the end as proof that Béatrice and Bénédict love each other in spite of the mutual loathing they show off.

The production makes extensive use of symbolic images. “These elements try to tell the psychology of love and how this is lived variedly,” says Fantin. “We have the butterflies symbolizing Béatrice and Bénédict, captured by the choir and put in a display case losing their liberty. There is the ”dream house” made of tulle, similar to a butterfly net, in which Héro and Claudio get married and which domestic warmth also attracts Béatrice and Bénédict. The mattress representing the marital bed, which, like the entire room, will split in two as two worlds that cannot be united.”

As a metaphor of primordial love, the forest is the environment in which Béatrice and Bénédict discover their love, which is instinctive, free from morality and societal expectations. “The forest is installed on a net. The net will then flip in audience sight and destroy this natural environment while putting Béatrice and Bénédict in a cage. Adam and Eve will be forced to get dressed as bride and groom and put into two display cases precisely like the butterflies.”

In the end, the couple will surrender to the experiment and get married; nonetheless, they will pronounce the sentence “tomorrow we will be enemies again”. At that moment, they destroy the audiotapes and take the butterflies out of the cases. As they are in their hands, the butterflies beat their wings again. 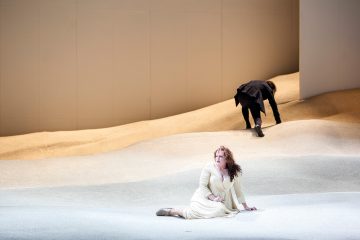 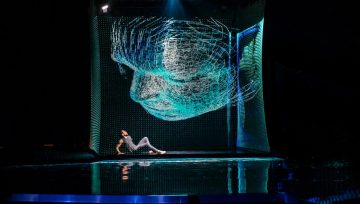 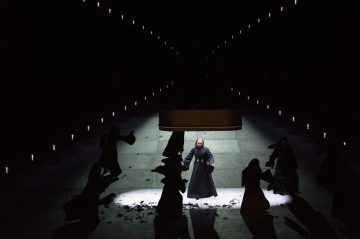